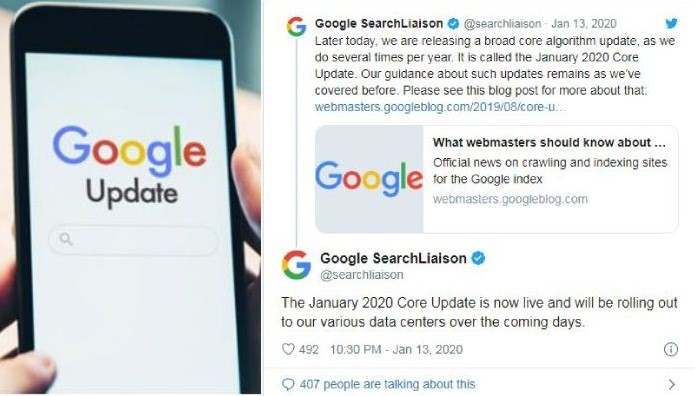 Since the inception of the Google SearchLaison account on Twitter back in November 2017, Google has announced many major core updates and their roll outs for better transparency and, of course, to guide the content owners and SEOs to serve their audience better.

Similarly, this year on January 13, Google has announced the roll out of Google's January 2020 Core Update. Update implementation might takes 2-3 weeks time as it is rolled out through multiple data centers, located across globe.

However, the impact of this update has not been explained by Google as of yet. Google has also updated the layout of the SERP recently and as per the update, it will show up company icons (favicons) whenever users search something in the desktop search engine.

Google has its first major update announcement back in 2018 with the Mobile Speed Update and of course, how can we forget the BERT update wherein Google has emphasized the importance of long-tail search queries in displaying more accurate results but again, that was slightly different from the core updates.

After the Mobile Speed Update, Google has come up with 4 more important core updates other than the January 2020 Update.

This update was largely related to Ranking shifts concerning health and other sensitive topics related keywords. In addition to this, Google also highlighted the importance of building trust and understanding important user signals.

Google made a major change to its core algorithm for the first time and all search queries that were associated with the acronym E-A-T (Expertise, Authoritativeness, Trust) had a sudden yet massive change. Google use it fight disinformation. Know how Google Fights Disinformation.

The impact of the update has been largely experienced by the health sector. While some health websites benefited largely from this update, a lot of them have experienced a sudden drop in their performance too.

In this update, Google emphasized the importance of content quality and its improvements for better ranking on the SERPs.

As per this update, there have been major changes felt in the food, health and travel sectors and this was somewhat considered to be a pretty aggressive update according to many SEO specialists.

Google has recently announced its core update 2020 and it happens to be the first core update of the year. The next best thing to do now would be to comprehend how this update can have its impact.

Since Google has not come up with a clear explanation about the update, it is important to figure out as to what all topics or search queries are going to be affected.

It will also be wise to spot the aspects that Google has tweaked in its algorithm. It is important to understand the way as well as the extent to which web content will be affected by it.

Some SERP analysis tools detected following industries to be majorly impacted and seeing high ranking volatility and traffic up & downs.