The best 3 seo strategies used by the ecommerce giants Amazon alone contributes to a massive portion of the sales of the eCommerce industry. It will be interesting to find out as to what really helped companies like Amazon do so well and get so huge.

We will analyze the entire thing from the SEO point of view and try to find out what actually is helping these top eCommerce companies perform so well in the search engines. It certainly will help many of us learn a lot from them.

Needless to say, Amazon has been dominating the eCommerce industry for the past many years. However, it is important to understand the reasons behind its stunning success so far. As we tried to analyze the underlying facts, we came across one of the most important yet underreported aspects of Amazon's success. This is none other than its huge catalog of products and, of course, its tie-ups with the third party sellers.

As per the Q1 in 2018, third-party sellers contribute 52 percent of the total sales volume on Amazon. In 2017, the sales from third-party sellers elevated to $31.88 billion in revenue which is certainly a huge portion of Amazon's revenue for the year. 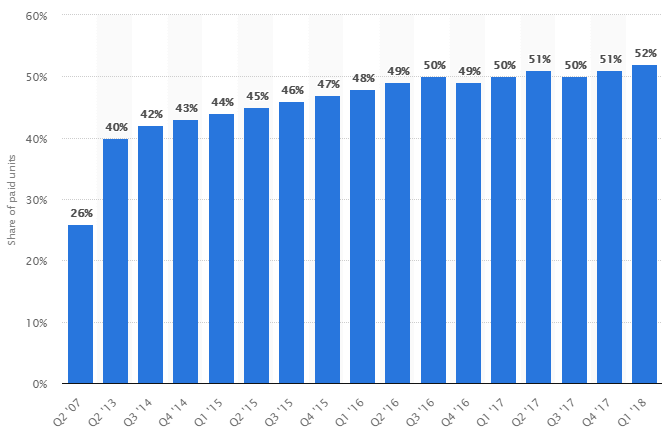 Third party sellers have always been a very important part of Amazon's growth. Subsequently, this helped Amazon to offer its users with a wide selection of products and at the same time, reduce the prices for the customers. The concept was designed by Jeff Bezos, the CEO of Amazon and it is internally known as the Virtuous Cycle.

If we try to see it from the SEO standpoint, offering a wide selection of products is certainly targeting more queries. This is certainly an excellent way to capture more of long tail traffic. Subsequently, this helps in selling more brands and ranking increasingly higher.

Another eCommerce giant with a very successful strategy to consider is certainly eBay. eBay makes roughly 9 billion dollars per year. Although there is no denying the fact that eBay pretty much runs on the same concept of third-party sellers that Amazon uses, however, it has definitely taken the concept a lot further. eBay is not only a platform entirely based on third-party sellers but also, it is a well-known platform for bidding on items sold by other users. As a matter of fact, eBay earns more backlinks than Amazon does; as per the SEMrush update, while Amazon earned about 2.7 billion backlinks, eBay earned 4.8 billion.

Although there's no denying the fact that eBay earns revenue far less than Amazon but it definitely has a leading edge over Amazon when it comes to backlinks. Hence, somewhere down the line, it's doing something very right and if you are wondering as to what it can be, it's offering the sellers a very good reason to link their pages to the eBay's pages and auctions. Also, they update the links regularly as the new auctions go up.

Etsy is remarkably successful in terms of US traffic. Although Etsy uses almost the same strategy as eBay of offering its users a platform for selling and earning automatic promotion, it has a small twist to it. Etsy has gradually turned out to be a platform to buy strictly from creative people everywhere. This ensures that each product is unique with most of the sellers as artists and craftspeople. According to SEMrush, Etsy has around 49 million in search traffic.

While, the big eCommerce giants like Amazon, eBay, and Etsy continue to dominate the eCommerce industry, there is still a lot of space for the smaller players to capitalize on provided that we really learn from the biggest winners. Subsequently, this will help us find our own way and maybe, much innovative.